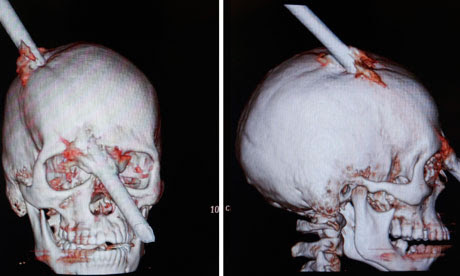 As a psychology student one of the first things you learn about in class is the classic case of Phineas Gage, a 19th century construction worker who was unfortunate enough to have an iron rod driven completely through his head, damaging a substantial part of the left side of his brain, and surviving the whole ordeal.

Phineas Gage, who’s injury resulted in damage to the left frontal lobe, is often documented to have been left with profound behavioural and personality changes, not surprising given that the frontal lobe is responsible for higher mental functions important for social situations, such as reasoning and decision-making.

The case is significant in the field of neuropsychology because it influenced early discussion (and findings) that damage to specific parts of the brain can affect specific functions while leaving other functions intact. The case of Phineas Gage has also been popularised in the media, being mentioned in episodes of shows such as House, Medium and Ripley’s Believe it or Not (Fridge Magnet anyone?).

Amazingly, a 24-year old Brazilian construction worker recently sustained a very similar injury (though the injury was to the right side), and like the classic case, the worker was not only conscious moments after sustaining the injury but he was also able to talk and explain to doctors what happened. The worker reportedly felt little pain and looked as if nothing had happened following the accident.

As can be seen from the photo, the iron bar (which had fallen from the fifth floor of a building) entered the back of the worker’s skull and exited between his eyes. He reportedly narrowly escaped losing one eye and permanent left-sided paralysis.

The doctors who treated the Brazilian worker remarked that the iron bar entered a “non-eloquent” part of the brain that does not have a specific known function. Though, with the patient reportedly still in hospital for at least two more weeks, only time will tell as to whether this man will ultimately develop any of the long-standing behavioural and personality changes sustained by his 19th century counterpart.

As argued by Dr Hamberger, Clinical Neuropsychologist at the Neurological Institute of New York, the lack of reported concern by the worker that a 1.8 metre long iron bar has penetrated his head may be evidence in itself of more subtle higher-level cognitive changes that won’t be immediately apparent before more detailed neuropsychological testing, such as self-awareness and insight.