How the brain organises our visual world

We live in a world in which we are bombarded with thousands of visual images every day. Recently researchers at the University of California provided a unique insight into how the brain organises and stores these visual images.

They then created a map to show how images of these objects and actions were organised by the brain. What they found was that the brain works efficiently to categorise images enabling similar images to be stored together in compact brain regions.

The graph below, taken from this study, shows how the brain links categories which are semantically related. To make it easier to identify, researchers have shown similar categories using the same colour. For instance, images to do with “person” are shown in green, whilst animal images can be seen clustered together in yellow. Images related to vehicles are identified by pink.

From this we can see how the brain links related categories together. Categories that are represented similarly in the brain are plotted at nearby positions. For example, information about humans shares the same neighbourhood in the brain as information about animals. Categories that have less in common, however, are located further away from each other in the brain. The graph below shows how to the brain, “person” and “talking” are represented as being more similar and having more in common than “kettle” and “talking”. 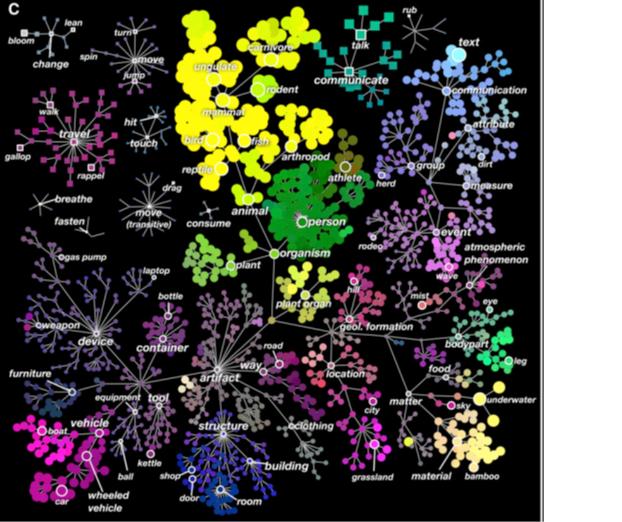 This study suggests that rather than each category being stored in its own distinct brain region, the brain is able to determine whether or not diverse categories share overlapping or common features and then group them accordingly in a continuous space. The brain actively ascertains the relationships between categories in order to work out where to store images. This more effectively utilises the relatively limited brain space available, given the size of our brains, and helps the brain to be more efficient by minimising the number of neurons required to represent each feature of an image.

A further interesting finding was that whilst only five subjects were included in the study, the authors were able to ascertain that different people share similar semantic layouts. That is, all of the subjects tended to use very similar cortical maps to store visual images. As well as providing us with a unique insight into brain organisation, the results of this study have implications for improving computer image recognition systems and creating other brain-machine interfaces.

Researchers have produced an interactive version of the brain map which provides a detailed insight into the visual function and organisation of the brain which can be found by following the link: http://gallantlab.org/semanticmovies/